On Thursday afternoon we decided to join my in-laws and head to Redfish Lake in Idaho with them. I was super sad that I had to miss the run with my dad :( I was seriously very bummed. But he did SO incredible!!!! He ran a 1:32.50!!! Blazing fast! I have the coolest best dad ever! I am looking forward to running a race with him hopefully really soon.

Redfish was really fun even though I was really sad about missing my dad. We got there late Thursday night. On Friday we did a crazy hard hike! It was like Mt.Timp times 3. But it was gorgeous and way fun! I loved it. And it was so surprising, but I had so much energy and hardly got tired!!! I felt way better than when I was hiking Timp. We hiked to a lake at the base of Braxon Peak. It was so pretty. We ate lunch and sorta swam and laid in the sun for a while and then headed down. I think going down almost took us longer than going up because it was so steep and slippery! But we finally made it and it was awesome. 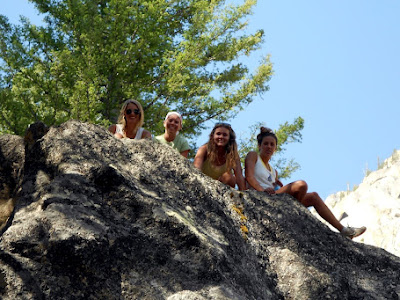 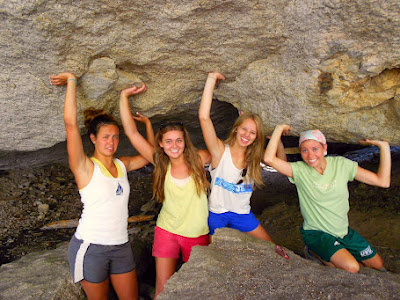 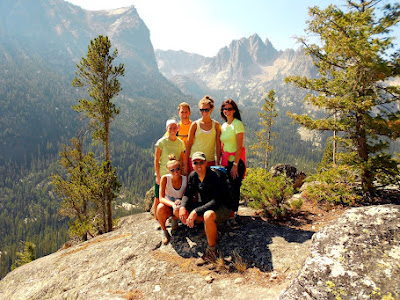 On Friday we sorta slept in and I went for a shortish run. The smoke from all the Idaho fires was pretty bad and it was hard to breathe. But it was nice and chilly and pretty! I ran around the lake and along a river jumping trees like a hurdle pro. Then....the best part of the trip almost.....we went to the lodge for the buffet breakfast. YUM!!!!!!!!!!! I went gluten crazy. I had french toast and eggs and two different kinds of bacon and donut holes and hashbrowns and syrup and quiche and oatmeal and hot chocolate and......yeah :) hahaha. I was kinda sick all day but it was totally worth it.

The rest of the day we laid out on the beach getting tan and swam in the chilly water. It was so much fun. Jeff and Audra (Sterling's aunt and uncle that run Redfish) took us on this beautiful pontoon boat cruise around the lake and served us dinner appetizers all fancy like. We felt quite special.

Sunday we went to church. It was a chapel that served three different religions. The backdrop behind the pulpit was huge windows and the view was the Sawtooth Mountains. So pretty! All in all it was a really fun weekend and so much fun to be with Jeff and Audra's family!! They were a blast and so generous and fun.

Chemotherapy went really well again yesterday! Just the same old routine. It is the weirdest thing....as soon as they give me Benadryl, seriously within 15 seconds, my eyes get all droopy and blurry and my brain shuts off. It is bizarre. So then I sleep and wake up like 45 minutes later feeling mostly fine again. Then we went out to lunch with my aunts so we could plan a 5k!!!!!!!!

It is going to be sooooo awesome. I figure I might as well announce it here even though it isnt quite finalized yet. But we are planning a Fallen in Chocolate 5k run on September 29 so save the date! I will write more about it when we get the fliers and shirts designed and all the paperwork finished so it can be official.

This morning I got to run with my UVU teammates. Well behind them, but at least at the same place and time as them! It was so much fun to see everybody and not weird at all. And one of my best friends since I was like 6 came down to play all day! Yay! We walked to the park and talked forever and played games and ate creamies and drank Gatorade. Thanks for coming Cesia :) I forgot to take a picture :(
Posted by Kalina Zufelt at 4:09 PM